As part of our awesome /mid week where each year we have a look at new promising technologies in the Kubernetes & Cloud Native space, we took the time to have a deeper look into Cilium and tried out different features of it on multiple Rancher clusters with Cilium as CNI (Container Network Interface).

In this blog post we would like to highlight some first thoughts and experiences about Cilium, since we believe it has a huge potential in becoming the de facto standard CNI on Kubernetes clusters. Even if it’s not hard to install and use Cilium on Rancher clusters, we would like to describe how it’s done. This should give you the possibility to set it up on your own Rancher setup within a few minutes.

Cilium goes a whole new way in order to bring networking into Kubernetes. In contrast to traditional Kubernetes networking plugins which make heavy use of iptables, Cilium completely removes this dependency or at least tries to minimize its usage. That’s mainly because the founders of Cilium (https://isovalent.com/) saw the huge potential of a new upcoming technology inside the Linux Kernel called eBPF.

eBPF allows applications to inject small code snippets directly into the kernel by attaching them to “attachment points” such as kernel functions (kprobes), userspace functions (uprobes), system calls, sockets and many more. Since eBPF is a huge topic on its own and provides enough content for multiple books, we won’t explain it here any further. If you want to get it to know better, we recommend to have a look at Thomas Graf’s (Cilium co-founder) talk about “BPF & Cilium” and/or the official eBPF documentation.

Cilium leverages eBPF to provide a

… to just name a few features. If you want to dig deeper into the Cilium features, consider having a look at Thomas Graf’s “Cilium – Bringing the BPF Revolution to Kubernetes Networking and Security” talk and/or the official cilium.io website.

Installing Cilium as a CNI plugin on a Rancher cluster is quite simple. The following steps are not much different from the ones in the official “Quick Installation” guide. They just need some ajustments on the Rancher side as a prerequisite.

In the cluster creation menu of Rancher’s UI, you need to select Edit as YAML since the graphical interface only allows to choose from predefined list of “Network Providers”. 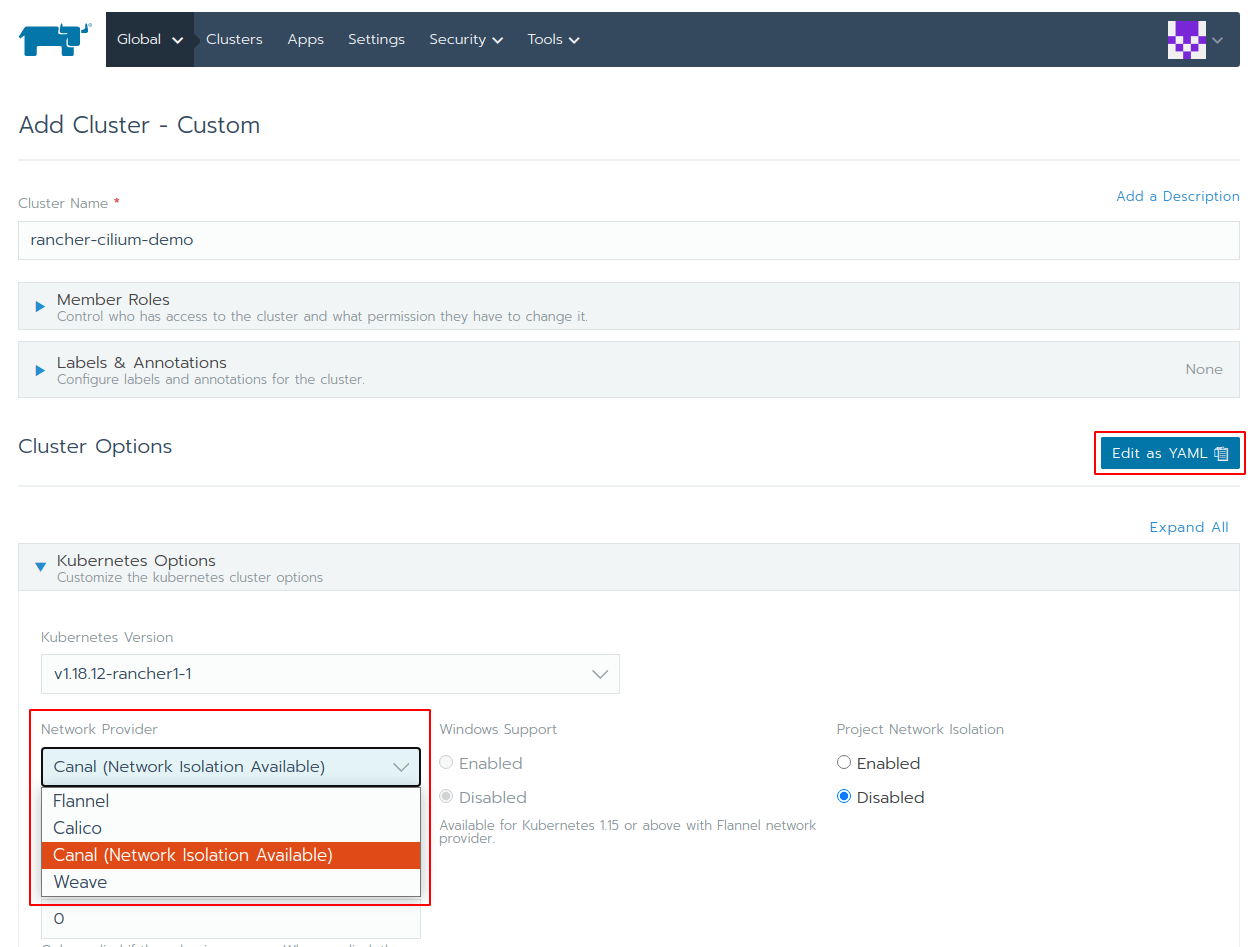 In the YAML, search for the network: dictionary and replace everything below it with plugin: none.

Hint: This YAML configuration also works the same way if you are setting up your Rancher cluster using the RKE CLI tool.

Now you can click Next and let Rancher create the cluster.

Before adding nodes to the cluster, you should ensure they all have the eBPF filesystem mounted:

If there is no none on /sys/fs/bpf ... output shown, you need to mount it and persist the configuration using the following commands:

Afterwards, you can add the nodes to the cluster using the Rancher-provided sudo docker run ... rancher/rancher-agent:v2.4.8 ... commands. After a few minutes, you will see that the Nodes overview will show an error message in the Rancher UI:

This error is expected: The Kubernetes components are not able to fully communicate with each other because you didn’t deploy the CNI plugin, yet. To remedy the situation, first add the official Cilium Helm v3 chart repository to the Rancher catalog (Tools -> Catalogs -> Add Catalog). 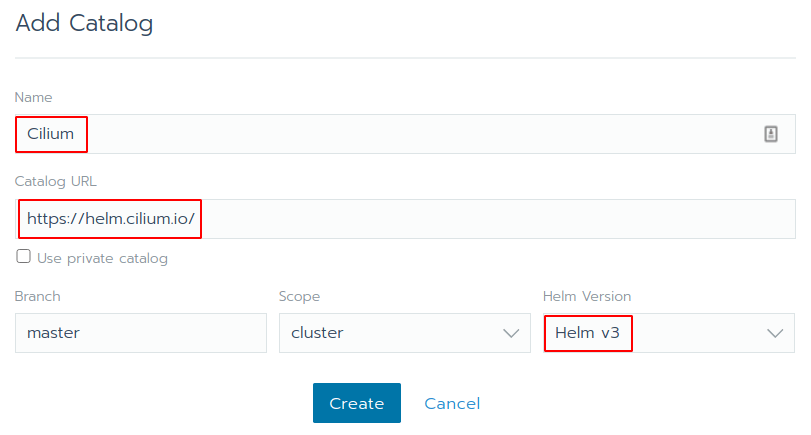 Now you are able to deploy Cilium as a Rancher App inside the cluster’s System project. 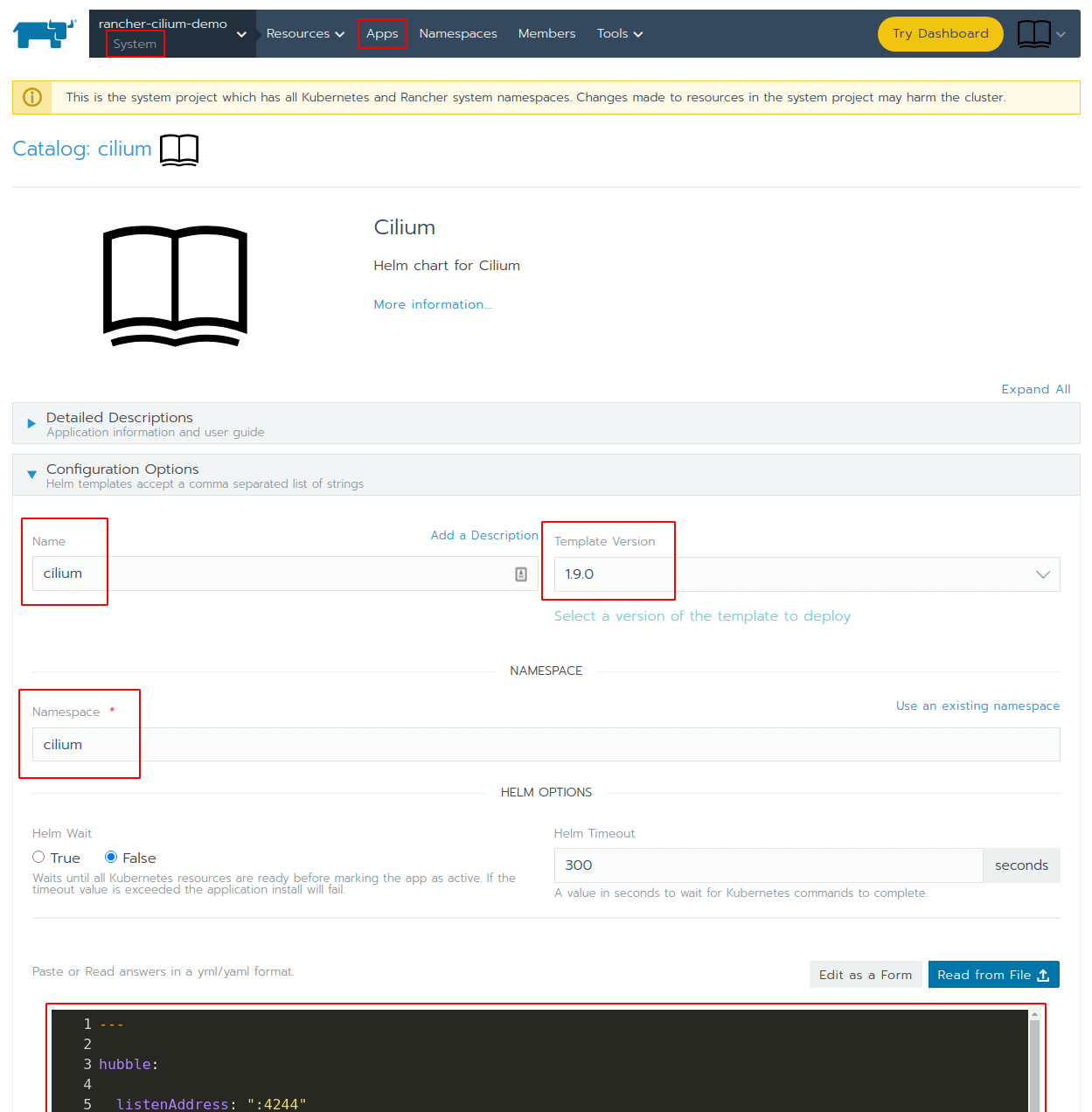 Specify the Helm chart values according to your needs. All available values can be found in the official values.yaml file in the Cilium Github repository. In our setup, we chose to enable IPv6 to use dual stack, exposed some Prometheus metric endpoints and enabled Hubble to get some insights into the cluster internal communication paths.

After 1-2 minutes, you should see all nodes as active, and proper deployments of all Cilium objects.

Finally, the Cilium app should automatically have created an Ingress object which allows you to access the Hubble web UI via hubble.cilium.<one-of-your-node-ips-here>.xip.puzzle.ch (or whatever URL you’ve specified in your Helm chart values). 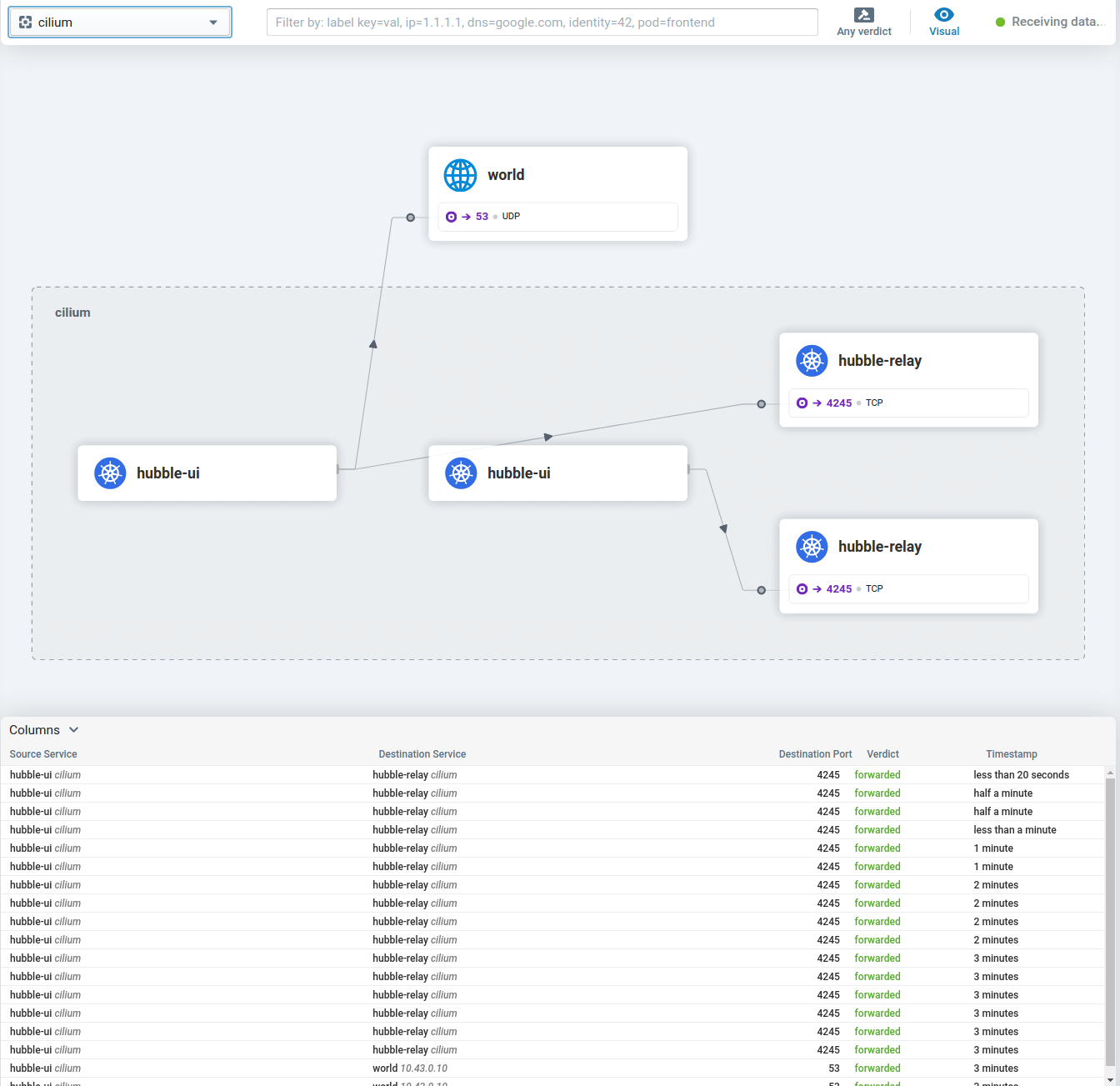 While only a quick glance at Cilium so far, we already consider its potential to be massive, especially if the requirements for Kubernetes networking include items like the following ones:

Of course, Cilium also offers further quite handy features, but some of them are already supported in other CNI plugins like Canal, Calico, Flannel or Kube-Router as well:

Last but not least, we would also like to mention that Cilium is now officially supported by Red Hat OpenShift via its own operator and Rancher will add Cilium support in its next minor release 2.6. Additionally, if you would require 3rd level support since you are planning to run Cilium in production, Cilium Enterprise from isovalent (company behind Cilium) might be a good option for you.