After our tweet about the world’s first self-order point with Energy Kitchen in Bern went viral, the Lightning Network research startup invited us to attend the Lightning Hackday in New York City. Wow! Puzzle ITC in New York!? We were super excited. Here’s a summary of what Gabriel Comte, Thomas Philipona, and I did on our journey to the Big Apple. The second part of this blogpost will be online next week.

Our adventures started on October 24th. After spending the 7-hour flight watching movies eating snacks and sleeping, our enthusiastic Puzzle crew landed in Newark. We jumped in a cab and headed into lower Manhattan. It was Gabriel and Thomas’ first time in the city that never sleeps, and they were overwhelmed by the tremendous skyline. Puzzle’s backoffice booked us a great hotel close to Wall Street (thanks Puzzle backoffice!), so we checked in and headed to the hotel bar for a few drinks. 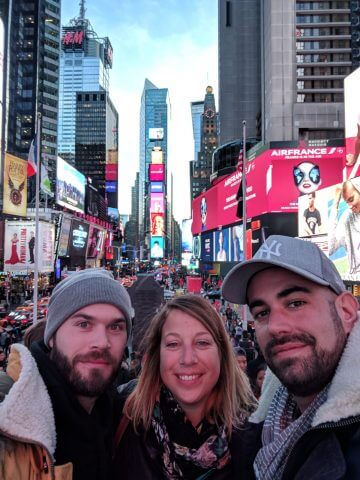 Next morning, the first thing we did was eat a real, American burger in a real, American diner. We followed the breakfast with sightseeing, including a visit to Ground Zero, Wall Street and the Charging Bull (and the Fearless Girl), Times Square, and a walk along the Hudson river to the Brooklyn Bridge. Despite the beautiful weather, it was relatively cold and both of my colleagues had to buy winter jackets. To celebrate Thomas’ birthday, we ate at a great steakhouse. Believe me, the steaks were huge!

On Friday, the Lightning Team prepared for the Hackday event. With growing nerves about the talk, we sat all day behind our laptops (very techie-like) preparing the presentation, drinking lots of coffee, and eating fast food.

The big day arrived, and we walked to the event at the Flatiron school next to the Wall Street bull with nervous (and excited) butterflies in our bellies. Ironically, we were only a few yards from the world’s major bankers and the business we want to change with Lightning. The Hackday visitors liked the irony, of course. We put on our “Reckless hats” and looked forward to the first talks. 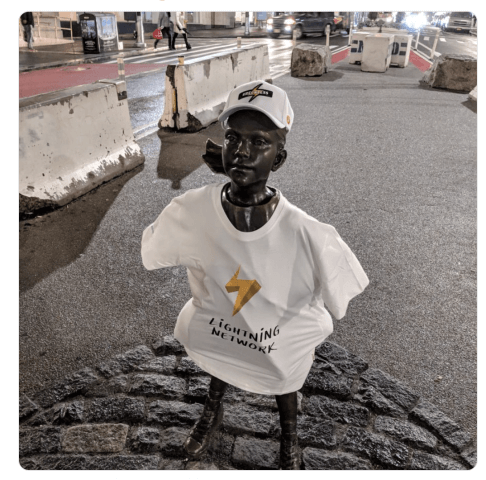 The topics during the first day were interesting. Christian Decker @Snyke from Blockstream talked about the history and future of the Lightning Network, Rene Pickhardt @renepickhardt presented his implementation of a Lightning autopilot. He wants to prevent that nodes with much traffic are getting even stronger and become power nodes. Alex Bosworth @alexbosworth talked about Lightning and possible killer apps which can help Lightning to make a breakthrough. We also learned a lot about cool new applications like Lightning enabled games, and an application that converts block hashes into music and messages sent via the Lightning Network. Incidentally, we had enough time to talk with other techies. Most of them are really into Lightning and we loved the atmosphere.

At 5:00 pm, we had our talk. The community liked it and we were very proud to present our use cases.

At 09:30 am, we were back on site, but few visitors were there yet. Actually, the only people there were the techies that had hacked all night. To wake up, we had some coffee and muesli. Then, the morning Barcamp sessions started where anyone who wanted to could present a topic. We used the time to listen to a few talks and open sourced our beer tap on github. Pierre Rochard @piere_rochard presented an interesting concept. He had developed a plugin that allows him to integrate LND into excel to track and analyze all his node information. It looks like an LND admin gui for excel. Further, Gabriel talked a lot with the other techies and got new knowledge for running his own and our Puzzle Lightning node securely. In particular, he has informed himself how we should handle the whole backup issue so that our node is properly constructed from a security point of view.

Looking back, we were able to learn a lot at the Lightning Hackdays, found many new contacts and positioned ourselves in the Lightning Community. The trip to New York was an exciting and successful experience.